Things I love about Indonesia

Well, after so much time of silence I decided once again to write my blog.It's almost six months I'm in Indonesia. To be more precise - in Java island. Six months of volunteering in the Indonesia International Work Camp (IIWC) (http://iiwcindonesia.wordpress.com/).And because only two months are left, I do not feel like writing an official report about what I was doing, or trying to remember these past six months as clearly as I can. Because only two months are left, I am starting to feel nostalgic and I am starting to mentally collect things with which I fell in love in Indonesia. Things that I'm gonna miss when I'm back. So instead of the report, story, or picture presentation, I'm composing a list of things. Things, I'm not sure I can live without anymore but I have to.The order of things are not important.

Food in general, and soto - especially

Well, almost every city in Java has it's own way to make soto soup: the idea is that you put chicken/beef, vegetables and spicies inside the bowl and only later you pour broth. Or, as it is in this case, they give you broth mixed with beef and vegetables, and you pour this on rice yourself... The best one is Soto Betawi... If Lina reads this, I loved Soto Bandung too. I am very grateful for your mother that she made it to me, but, boy, soto betawi is just perfection:)

This is me and other Lithuanian who currently volunteers in Indonesia, Jolita. We are in cafe in Borobudur, in Maja's cafe - the best cafe in all Java (it is very close to Borobudur temple). The thing is that me and Jolita agreed to meet at this place at 9, but when we came, we found out that it's closed.

Instead of going to other place, we went and found the owner - Maja. She was asleep, and just few hours ago, but instead of throwing us out, she agreed to make my favourite coffee: the mixture of many beans that I do not know. But I sure enjoy the taste.

Coffee Indonesia is one of the main producers of the most expensive coffee in the world - Kopi Luwak. It is the most expensive coffee in the world because its made from the coffee beans that are defecated by the Asian palm civet. So it is literally, and sorry for my French, it's a shit coffee. You can read more about it here: http://en.wikipedia.org/wiki/Kopi_Luwak But I have to say that for me this coffee was special only because of its price, not because of its taste. But the thing is that Indonesians produce so many good coffee that after you try those you do not want to drink Kopi Luwak again. You can get much cheaper and better coffee:)

Kaki lima, and the sound of food There are food sellers who move with their food carts. And while they move: they produce some kind of sound. When you hear it: you know if it is nasi goreng, mie goreng, gule, bread, ice-cream. All of them have different sound...

Indonesian language It is the most easy language in the world, A language without tenses and genders (the verb does not change if you talk about today, yesterday or tomorrow). But it's not only the easiness I like, because in the end, if you study it more carefuly it's not so easy: with all the prefixes, and suffixes, and many synonyms). After 6 months I can already have a mid-level conversation with an Indonesian, but I still cannot read normal texts... But I also love some sayings that says something about the way Indonesians think,.. Kemarin - it means yesterday, but also it can mean any time in the past. Besok - it means tomorrow, but also it can mean any moment in the future. So do not take the promise to meet besok so easy:) Belum - it means "not yet". But the beauty is that Indonesians answer almost any question "not yet". "Have you read this book?", "Not yet". "Have you ever been to Europe?" "Not yet" I just love this answer. Hati-hati - Literally it means "heart-heart", but usually you say it when you say goodbye and wish a person to be careful.

and many more things...

A woman (actually, a relative of my friend Alfi) shows me how to make batik, Lorog, East Java

The Ramadhan experience Someone ever told me that travelling in the Muslim countries during the Ramadhan is horrible: streets are full with angry, hungry and thirsty people. Oh, how this is not true. This was the best and most beautiful month during all of my stay. First two weeks I spent in the orphanage in Tulungagung (East Java) teaching small kids English language, then I spent few days in Tegal and Semarang (Central Java), and then moved back again to East Java, to Madiun, where I spent the last Ramadhan days and Idul Fitri - the most important Muslim celebration - with my friend Alfi and her family. (My experience of this became an article "Ramadhan diaries" that's gonna be published in the journal "Naujasis židinys-Aidai".) Indonesia is not my first Muslim country. Before I travelled in Palestine, Egypt, Morocco and Iran, and I always felt welcome. But I never felt so welcome as during this month in Indonesia. This month people are not angry, they are extra double kind. They share food: with friends, neighbours, and people they do not know. They take care of the orphan kids and those who are striken by poverty. And, also, just before the end of Ramadhan, they deliver zakat. Zakat is one of the pillars of Islam: it is an obligatory charity. In Indonesia it is usually 2,5 kg or more rice from each member of the family. You can deliver it yourself or give it to the mosque, and it delivers the rice to those it thinks are the most in the need.

Hospitality of Indonesians So here is a story. One of many. I am in a regency called Tulungagung. It's East Java. With few of my friends we are visiting their lecturer, in his home. (It's sounds strange from European point of view, but not in Indonesia, well, at least, Java). So, we are in his home, and he asks do we want a fresh fish. "Of course, we want", - says I excitedly. So he takes us to his backyard, where he has a pool where he breeds fish. He takes a scoop-net and catches few fishes, and wants to give us to take them home. But we explain that at the moment we live in a place in which there is no possibility to cook. So what's the solution? He says we can go and cook in his kitchen. His wife and daughter helps. In the end they also gives us rice, tempe (a very popular fried side dish made of soya beans, sambal (very spicey sauce), coffee. And we ate this fish in his house. In the end we also got the invitation to come again. And we used that after few days:)

The sound of adhan. For those who do not know what "adhan" means - it's an Islamic 5 time a day calling for prayer. In Indonesia you can hear this sound around this time: 4.30 in the morning, around 12, around 15, around 18 and the last one is around 19. Because my project is specific: during these six months I did not stay in one place, but lived in 7 different cities of Java. So the proximity of the nearest mosque also always changed: in Semarang, the city I spend the most of the time, the mosque is around one hundred metres away, so I almost never hear it... in Tegal it was really close, and first few days, my eyes were wide open at 4.30 in the morning... After that, I cannot hear it anymore... in Yogja - never registered which one is the closest and never woke up at 4.30...

The orphanage boys are reading Koran in the mosque. The month of Ramadhan. Tulungagung (East Java)

In Tulungagung it was so close that it was impossible not to hear adhan either at 4.30 in the morning or 19 in the evening. Also, I lived there two weeks during the Ramadhan, so the sounds of mosque almost never stopped. in Bandung the mosque was really close, but I lived there after the Ramadhan. During this holy month I managed to get used to the sound of mosque as just to any other urban sound. It became part of the city: like cars, traffic, human walking and talking... in Pekalongan. Well, in the volunteer house in this city you can climb on the roof, and hear the sound of adhan coming to you from all directions. And it's just beautiful:)

Pramoedya Ananta Toer Pramoedya Ananta Toer (1925-2006) was an Indonesian writer. Also, a man, who during the Soeharto regime, spent 14 years in prison, in Buru island, because the dictator did not like his attitute. (More about his life and works: http://en.wikipedia.org/wiki/Pramoedya_Ananta_Toer) Even though his life was complicated (or maybe because of that), he wrote many novels. I've read his memoirs and now I'm devouring his Buru quartet. I love him, and I'm grateful to my friends Putru and Metta who helped me to discover him.

Blora is not a very famous city, but it produced a very good writer (and also, 3 wonderful members of IIWC stuff: Metta, Ismi and Nia). I went to Blora and visited the house where the writer was born (with Metta, thank you mbak:). There I met his brother Soesilo Toer, who spent 12 years in the Soviet Union and perfectly knew about the existance of the Baltic countries (that's rare in Indonesia). Also, we talked a little bit in Russian:)

This wonderful girl from Spain I am kind of forced to include her. She is setting near and telling me that I have to write about her. Nevertheless, she is pretty cool. Her name is Mariate, she is from Spain. She is also a volunteer. Her project is based in the orphanage in Salatiga. And she is fun:)

The mosque of Tegalrejo from the volunteers' house balcony.

But my favourite adhan is in quite an unusual place. It's a small village called Tegalrejo. It's an unusual place, because, well, this village is a prostitution area. But the voice of muezzin - the man who calls for prayer - it's just unbelievable beautiful. This is the only place where I do not mind to be waken up at 4.30 in the morning:)

No shoes. Almost. It's almost six months that I almost never wear shoes. I wear flipflops, but also just outside. Every time I enter some cosy place, the shoes are off. Isn't great? I just love to live in the tropic climate. (And I'm coming home in December, oh boy....) 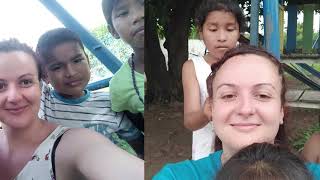 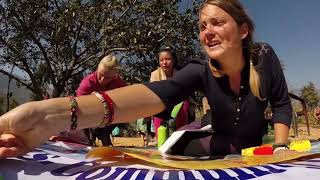